City Schools of Decatur has voted in favor of Decatur's unreasonable commercial annexation plan that, if approved, will remove $5+ million dollars/year and more from DeKalb County schools. MANA Secretary and school liaison Tanya Myers and MANA Treasurer Judy Perras attended the meeting, appealing the school board to remember that as part of DeKalb County, City Schools of Decatur share the overarching mandate of educating all DeKalb students. While the COD school board seemed sympathetic to our situation and voiced some concern for  impact on Dekalb County Schools, at the end of the day,  they voted  to support the City Commission's plan.

WABE and the AJC have reported on the ongoing uncertainty triggered by annexation proposals, in particular their impact on public schools; both approached MANA for comment.

MANA maintains that it is wrong to allow City of Decatur's annexation to go forward without studying its impact on the County at large. The same goes for other cityhood movements and annexations. There are opportunistic, non-inclusive forces at play that want to impose new cities and annexations without allowing DeKalb citizens the opportunity to review all necessary information. We oppose these maneuvers. And we are not alone: other neighborhoods are speaking out against this mad rush, as noted in a recent press release.

MANA has forwarded the letter below to the DeKalb County delegation. Any who share these sentiments are welcome to use the text below, in part or in full, to contact the DeKalb Delegation and City of Decatur to share these grave concerns. Emails appear at the end of this post.


We, the Medlock Area Neighborhood Association (MANA) Working Group on Annexation, are writing to oppose, in the strongest possible terms, the City of Decatur’s plans to annex commercial properties within and adjacent to our Medlock neighborhood. (map below created by Brad Mayfield) 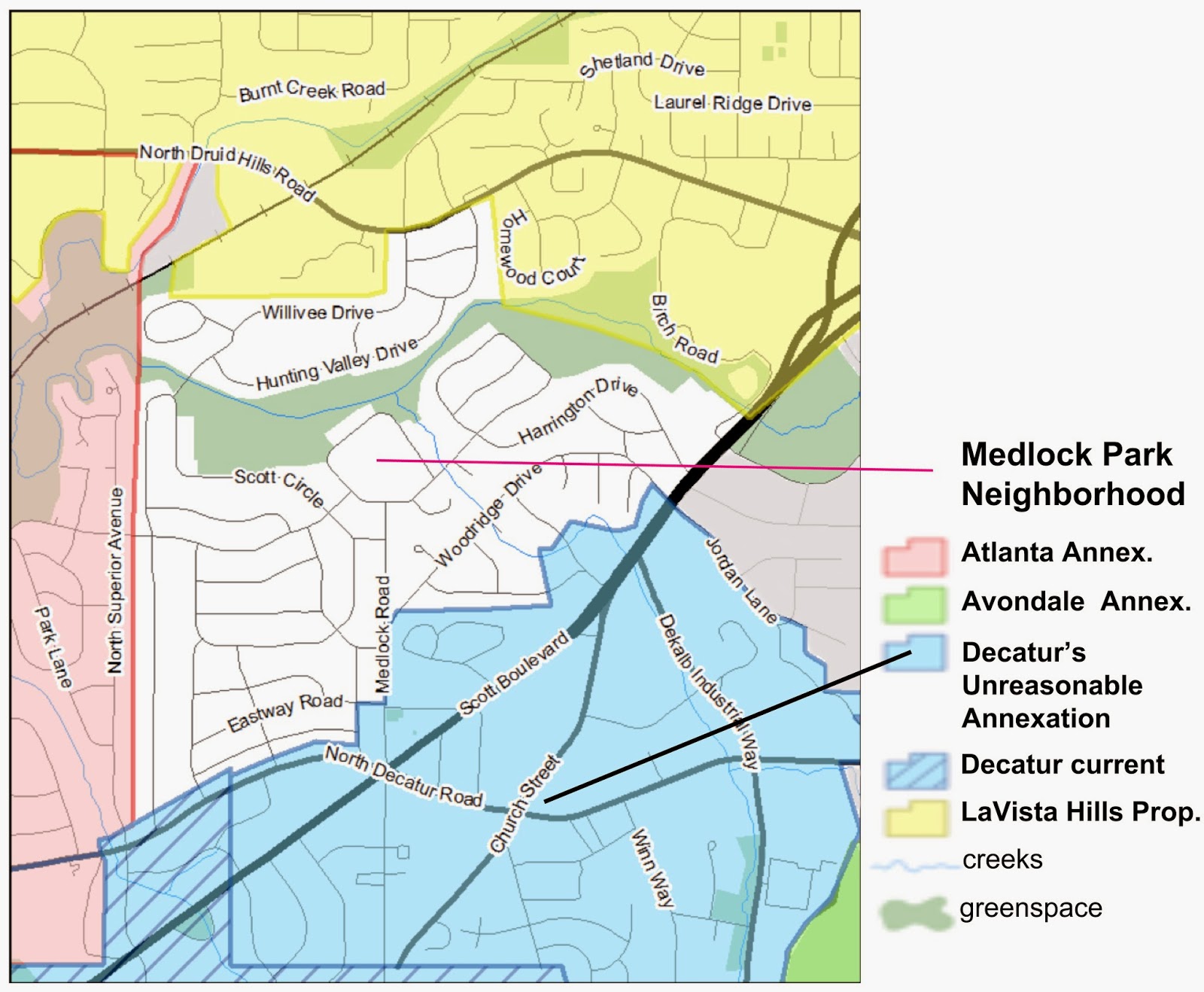 The City of Decatur has proposed to annex and strip away commercial property that is historically and geographically connected to our neighborhood without also accepting the residential homes and families that support and rely on these businesses. As detailed below, Decatur’s unreasonable annexation proposal would

·       Irreparably harm our DeKalb Schools and the quality of our children’s education through the decreased local tax base,

·       Isolate our Medlock community as an unincorporated island, while also wholly eliminating our neighborhood’s voice in all governmental decisions that deal with surrounding commercial and residential zoning and development, and

·       Pilfer the commercial assets of our neighborhood, while ignoring the well-being of our residential community and Medlock’s long-standing commitment to these surrounding developments.

MANA is a voluntary citizens’ association that was incorporated in 2004 to represent Medlock Park, a neighborhood of more than 1,300 homes and families just north of Decatur. The surrounding businesses where we work, shop, and dine, such as Melton’s App and Tap, Suburban Plaza, and Emory Commons, are an integral part of our community. Medlock residents support them on a daily basis, and they support our schools and children. We have stated our objections to these annexation plans in two meetings with representatives of Decatur and made specific, reasonable requests which have been ignored.

The City of Decatur has made it clear that their annexation plans include our businesses but exclude our homes because they want the expanding commercial revenue without adding more students to their school system. This is unfair to MANA families. These businesses generate more than $5 million for our DeKalb schools, a figure that will only increase with our current revitalization efforts. Annexation of these commercial properties by Decatur, without our associated residential areas, means that, while Medlock residents can shop locally, most taxes will benefit the City of Decatur, not our community or DeKalb County. This would translate into a decreased tax base for DeKalb County, greater financial stress on our DeKalb County schools, and likely higher taxes for local property owners.

Over the past several years, MANA has been very involved in the development of surrounding commercial areas for the benefit of DeKalb County and our neighborhood.

·       While the City of Decatur has largely ignored our neighborhood efforts, MANA has been deeply involved in the Cross-Neighborhoods Committee for redevelopment of Scott Boulevard Baptist Church and Suburban Plaza, as well as the Atlanta Regional Commission/DeKalb Medline LCI along Lawrenceville Highway bordering our neighborhood’s entire east side. MANA and other local civic associations have devoted thousands of hours towards shaping these commercial assets in a locally sensitive and responsible manner. And DeKalb County, with support from the Atlanta Regional Commission, has invested financially in the project. Only now, after enormous community efforts have addressed the most intractable development issues, has the City of Decatur “laid claim” to these rapidly expanding commercial zones that they had no hand in growing.

·       The City of Decatur’s unreasonable annexation plans would also effectively leave our Medlock community as an unincorporated island in DeKalb County without a voice in adjacent property development and no viable commercial assets. (See map.) This could, quite literally, place our residents in the shadow of businesses when the City of Decatur chooses to rezone existing parcels without opposition.  For example, if Decatur chose to allow high-density development alongside single-family homes, MANA residents would have no say in the process. Decatur’s annexation “land grab” would both isolate and silence our thriving community.

As citizens of DeKalb, we understand that municipal maps within the county are in flux. We strongly feel that Decatur’s unilateral annexation approach is unfair, disingenuous, and threatens to cut off our vibrant Medlock neighborhood from the businesses we support while irreparably harming our schools. If Decatur insists on taking adjacent commercial property, it should also accept the entire Medlock residential area; it should certainly not be permitted to violate the integrity of the neighborhood by picking and choosing what it wants without regard to the best interests of DeKalb citizens.

We appeal to you, our elected representatives, to ensure that changes to municipal boundaries are made in a fair manner and provide the maximum benefit to all of the county’s residents.

Thank you for your time and attention.