Late last week, Emory University issued a brief statement about its intention to pursue annexation to the City of Atlanta. Around the same time, neighborhoods adjacent to the Emory campus were invited to a meeting, led by Commissioner Rader, to discuss the ramifications of such a move.

The meeting was covered by multiple sources:

Atlanta.Curbed: Emory annexation could be a smart move for Atlanta

Creative Loafing: Emory wants to be part of Atlanta--and according to some observers, speed up the long-awaited MARTA rail line

MANA board members attended the above meeting. As aways, we will be on the lookout for new developments and share what we learn through this website.
Posted by me at Wednesday, August 24, 2016 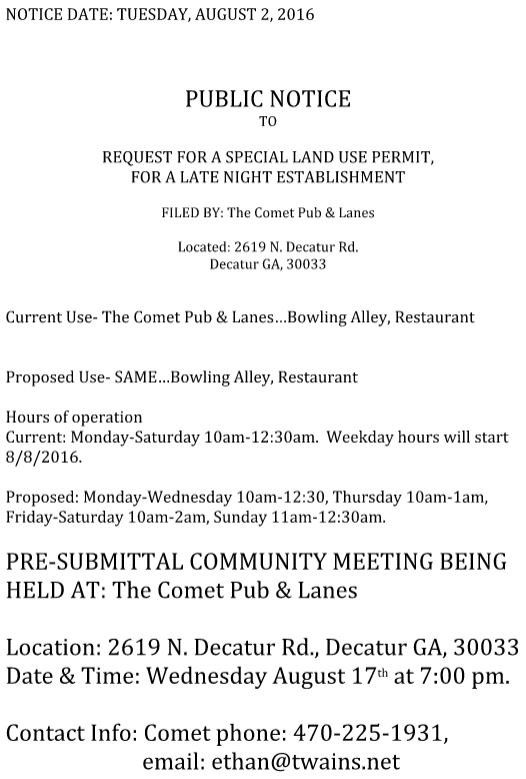 Email ThisBlogThis!Share to TwitterShare to FacebookShare to Pinterest
Labels: near, Suburban Plaza, zoning

Following a feedback session with the community last July, SJ Collins will present draft concepts of the development to take place at the corner of Church St. and North Decatur Rd. (former Naley dealership).

The 18-acre development will include restaurants, retail, greenspace and apartments. A "365 by Whole Foods" market anchors the development. 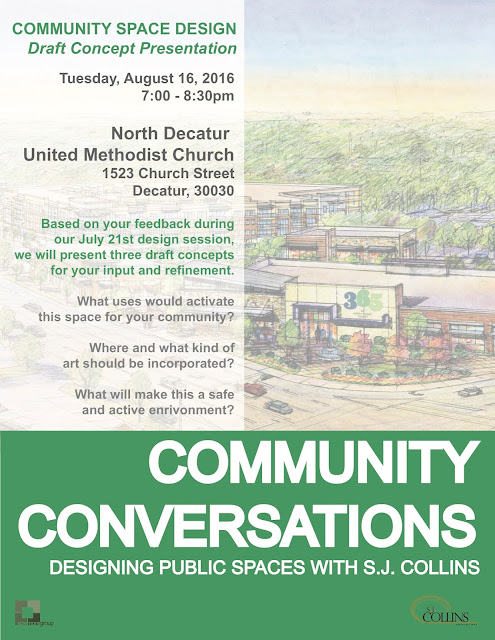 via Theresa Same, MANA Zoning Chair
On July 19, 2016, the DeKalb County's Board of Commissioners adopted the Medline LCI study with amendments to address concerns voiced by the community.

Background
In 2013, Commissioners Rader and Gannon's Medline Livable Communities Initiative study was funded by the Atlanta Regional Commission. The purpose: to develop a vision to guide future development of the area. The study was conducted by the Sizemore Group and was presented to the Community in June 2014.

Concerns about the 2014 study
In July of 2014, the Medlock Area Neighborhood Association (MANA), Clairmont Heights Civic Association (CHCA) and Good Growth DeKalb (GGD) drafted a letter to Sycamore Consulting (Sizemore's outreach consultants) and the Dekalb County Board of Commissioners to inform them that while we were supportive of the process and results, that we had serious concerns about proposed zoning overlay as suggested on pages 102 and 103 of the report. The main concerns, as posted here, were:


1) Our residential areas require appropriate, generous setbacks and clearly defined medium density. The Medline Study “encouraged high density mixed use development in the center of the study area, with medium density residential at the periphery, as a transitional buffer into the surrounding single family neighborhood" (p 102) while the actual zoning overlay map page 103 shows high density in the majority of the study area, often with no medium density between it and R-75 properties. The proposal also fails to include any recommended setbacks from residential property.

2) Clearly defined medium density is appropriate for the area; high density “up to 14 floor” developments are not healthy for established residential neighborhoods and set a worrisome precedent for homeowners within and beyond the Medline LCI. Since high density is defined as "15-30 units/acre allowing up to 14 floors" per the marked-up map below, this means, for example, that our neighbors on McCurdy could have 14 story buildings in their backyard and they would have no grounds on which to oppose it. This is also true for all the cul-de- sacs coming off the east side of Woodridge, some of Woodridge, Blackmon Drive, some of Medlock Road, Eastway, Sunstede (as the Woodshed and Melton's lots are also zoned for high density). This is also true of the streets in Springdale Heights, Decatur Heights and others.

At that time, we presented the map above to illustrate all the areas we identified as needing transitional buffers to ensure density stopping points and protect the integrity of our established single family neighborhoods. We felt strongly that supporting the redevelopment of the Medline could be done without jeopardizing our residential communities.

Adoption of the Amended Medline LCI Plan
With the support of the Medlock Area Neighborhood Association and the Dekalb Cross-Neighborhoods Council, the Board of Commissioners passed a resolution on July 19, 2016 to adopt the Medline Regional Activity Center LCI Study and to amend the Dekalb Comprehensive Plan with Supplemental Plan Section 5.7 (Supplemental Land Use and Zoning Recommendations).

The approved Supplemental Land Use and Zoning Recommendations override the land use and zoning recommendations in the original Medline LCI Study. The supplement was negotiated to address the concerns of the community about the lack of transitional buffers between high density and the adjacent single family neighborhoods (with R-75 zoning).

The Supplemental Land Use and Zoning Recommendations are available here [pdf, 32 pages]. This file includes an executive summary for Medline LCI as well as the resolution to adopt the study with amendments.


A Suitable Compromise:
After nearly 2 years of collaboration with Davis Fox (Policy and Projects Manager for Kathie Gannon County Commissioner for Super District 6) and Larry Washington, (Senior Planner, Long Range Planning Dekalb County Department of Planning & Sustainability) we were able agree on the approved supplemented map. We feel it adequately addresses our concerns - keeping the dense development concentrated at the core with transitional buffers to protect the adjacent neighborhoods.

The Medlock Plaza Area (including what is currently The Woodshed) was the most difficult area to reconcile. It may be noted that the height approved for the Medlock Plaza lot ranges from 3-5 stories. Though there are currently no plans to redevelop this corner, the County feels it would be appropriate for the frontage on N. Decatur Road to match that of the apartments across the street. The height would then have to transition to 3 stories and be compatible with the homes across the street on Sunstede Drive and Eastway Road.

The new code has a differential height plane that will have to be observed.

Additionally, the community would have an active role in redevelopment of this property through the rezoning process.This supplement will serve as a blueprint for development that will be allowed in our area - especially as it pertains to the maximum heights and density that will be permitted.
Posted by me at Monday, August 01, 2016