Per AJC, Fernbank Science Center has been removed from the cut list:


On Tuesday, board members took the Fernbank closure off the table. In an unofficial poll, they also scrapped the idea of saving $330,000 by eliminating middle school sports and saving $5 million by outsourcing custodians. They added cuts to health and dental insurance subsidies for employees for a savings of nearly $7 million, agreed to eliminate 200 teachers' aides for another $7 million and supported cutting the school system's pre-kindergarten program expenditures of $2.7 million.

The discussion continues, fast and furious, at the Getting Schooled blog.

The Virginia Highlands Patch live-blogged the May 31 Board of Education meeting's public comment section.
Posted by me at Wednesday, May 30, 2012

Email ThisBlogThis!Share to TwitterShare to FacebookShare to Pinterest
Labels: DCSS

In our area, we usually hear about projects involving our local creeks and their connection to the Chattahoochee River watershed. But DeKalb County is also home to the South River, and the AJC reports that the South River Watershed Alliance is hosting a workshop on stream restoration that will be open to the public:

South River Watershed Alliance presents a free community workshop--River of Opportunity: Community-led Restoration of South River and the Pursuit of Environmental Justice. The purpose of the workshop is to generate dialogue about current and historical disregard of urban waterways, streams, creeks and rivers in general and South River specifically, the lack of river restoration efforts in communities of color, and offer strategies on how to engage affected communities.

Last Wednesday, the AJC reported that DeKalb County School System's Superintendent presented a dire picture of the system's budget to the DCSS Board of Education. One big concern is that Superintendent Atkison


"...wants to raise the tax rate by 2 mills while also increasing the student-teacher ratio by three per classroom. She and her staff revealed Wednesday that the DeKalb school district must close a $73 million gap between projected revenues and planned expenses. The gap is a result of a drop in property values in the county, plus a rise in health care and other costs, among other things."

Following up on Friday, the AJC focused on how proposed budget cuts currently include shutting down Fernbank Science Center (FSC):

"The decades-old institution, owned and operated by the DeKalb County public school district, has offered a hands-on education to students and other visitors from across metro Atlanta and elsewhere. However, it might close, under a recommendation Thursday by the school board’s budget committee. Fernbank Science Center, which includes a planetarium, is near the Fernbank Museum of Natural History, which is operated by a separate nonprofit.

At an annual cost of $4.7 million, the building and its 56 full-time employees now are looking like a luxury to school officials. They are struggling with a $73 million deficit, and may have to cut teachers and school days to balance the budget."


N.B. Fernbank Science Center (FSC) is operated by DCSS, and is independent from the Fernbank Museum of Natural History. See Fernbank Museum's history page for how the two are connected. Fernbank Forest had been managed by the FSC but as of June 2012 will revert to the Museum's control as their 48-year arrangement expires.

These reports have triggered spirited discussion in various blogs such as Decatur Metro and the AJC's Getting Schooled.

If you want to share your thoughts or concerns with the DCSS Superintendent or the DeKalb Board of Education, DeKalb School Watch Two (a blog that focuses primarily on DCSS issues) has one-click email links on the right margin.

Also note that the DCSS Board is scheduled for a budget meeting on Wednesday, May 30 (this link includes DCSS's meeting schedule and some meeting minutes; BOE member Nancy Jester has some of her own meeting notes available through her own blog.). DCSS meetings are broadcast on PDS-TV24.
Posted by me at Monday, May 28, 2012

Creative Loafing has a wonderful report by Thomas Wheatley on Your DeKalb Farmers Market. The article summarizes the market's history, the owner's goals and vision, and its proposed expansion.

It even has a little bit of local MANA history:

How it got started in the area behind Melton's:


"...He leased a 2-acre plot of land where a skating rink had burned down at the intersection of North Decatur Road and Scott Boulevard. He poured nearly every penny into building two adjoining greenhouses totaling 7,500 square feet and slapped a plastic roof on top....

Neighbors at first were keen on the idea of a nearby produce stand but soon grew weary of constant traffic and dust. An ultimatum by the county government to pave an expansion or watch his business get shut down was blocked by Manuel Maloof, the legendary DeKalb County CEO, who said his wife — who purchased peaches from the market for $2 a box — would kill him if he closed the store...

And how when an ice storm collapsed the structure in 1979, shoppers made donations that earned them credit for future transactions:


"It was the winter of 1979 that nearly ended the business. A storm came through one night, and rain filled the market's gutters and covered the roof. During the cold night, a heavy sheet of ice formed. A phone call from an employee jolted Blazer from bed. The market had collapsed.

The insurance company said his policy didn't cover ice storms. Blazer asked customers for support and a loan. Write a check today, and two months later, when the store reopened, you could use the canceled check as a credit. Shoppers handed over cash. ... Within eight weeks the market was rebuilt and back in business." continue reading @ Creative Loafing

FYI, Emory University has launched a website (called "Tired of Traffic") with information about the July 31 vote on transportation initiatives.

Should you visit, note project map link on the left margin, and related resources on the right margin.
Posted by me at Wednesday, May 23, 2012

Memorial Day honors those who died while serving in the U.S. military. It does not look like there are any memorials/special events at the Decatur Cemetery or Oakland Cemetery, but Oakland is holding tours as usual on Saturday and Sunday.

For those who equate this holiday with the start of the summer break, here's some potential outings for the coming 3-day weekend:

And... it's pool time (pdf file): per this document, the Medlock pool is open

Our neighbors at North Druid Valley Hills are asking for everyone's support in addressing a dangerous stretch of road:


The North Druid Valley Hills Association is making a concerted effort to obtain a stop light at one of the exits from their neighborhood. As part of these efforts, they have created a website http://www.northdruidkills.com to draw attention to the issue. On the site are stories by residents and pictures showing the dangers they face entering and exiting their neighborhood.

The majority of accidents listed have occurred while sitting stopped, waiting for an opportunity to turn INTO their neighborhood. This section of North Druid Hills Road is extremely dangerous ...


Please visit the website, in particular the Voice your support page, which includes contact information for County officials who have the power to address the situation.

The website also features incident reports and photos.
Posted by me at Tuesday, May 22, 2012

Email ThisBlogThis!Share to TwitterShare to FacebookShare to Pinterest
Labels: transportation

The AJC has a nice summary of how people in different counties perceive the coming T-SPLOST vote, see Will sales tax shorten Atlanta commutes, reduce traffic?
Posted by me at Sunday, May 20, 2012 Yay, Dolly's been found. A kind neighbor captured her and she's on her way home.
Posted by me at Thursday, May 17, 2012

Received via email from Commissioner Rader:

I was informed today that GDOT is allowing the railroad to close one lane in each direction on Clairmont Road for repairs to the RR bridge.  The lane closures are scheduled to begin on Wednesday, May 16th at 9am and will continue to be closed until the work is completed.

The work is scheduled to be completed Thursday, May 17th in the evening.

GA Power to the rescue

A pine tree toppled across from Medlock Elementary, snapping an utility pole and snagging the power lines.

DeKalb firefighters and GA Power were on the scene soon thereafter. Here are some images of the GA Power crew at work. 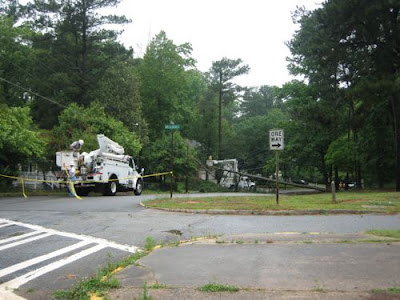 See flyer below for more details.

Email ThisBlogThis!Share to TwitterShare to FacebookShare to Pinterest
Labels: recycling

Friends of DeKalb Animals fundraiser [May 6]

Friends of DeKalb Animals is hosting a fundraiser tomorrow at Pub 71 on Peachtree Road.

Email ThisBlogThis!Share to TwitterShare to FacebookShare to Pinterest
Labels: pets

North Decatur United Methodist Church is looking for a qualified person to direct our Parent’s Morning Out (PMO) program. We are a program dedicated to creating a compassionate learning community for infants, toddlers, preschoolers and their parents.

Developmentally appropriate activities, outside play, art and music are part of our daily activities.  Our goal is to promote each child’s emotional intellectual, social, physical and spiritual growth in a loving, Christian environment. PMO operates year-round Monday - Friday 9:00 a.m. to 1:00 p.m.  Classes are offered for children ages 6 months to 5 years of age.

The ideal candidate is a mature person with demonstrated administrative and/or teaching acumen in a daycare or early childhood education setting. Other experienced administrators are welcome to apply. Salary is negotiable.

Please send your resume to:

We are looking to place this person into training the week of May 21st.

Email ThisBlogThis!Share to TwitterShare to FacebookShare to Pinterest
Labels: jobs

"Supermoon" this weekend [May 5]

Space.com reminds us that


The moon will swing in 221,802 miles (356,955 kilometers) from our planet, offering skywatchers a spectacular view of an extra-big, extra-bright moon, nicknamed a super moon. . . . To view this weekend's supermoon to best effect, look for it just after it rises or before it sets, when it is close to the horizon. There, you can catch a view of the moon behind buildings or trees, an effect which produces an optical illusion, making the moon seem even larger than it really is.

When is that? Almanac.com has the answer:

Just a reminder that ICS will be hosting an open house today, May 1.