With the beautiful weather, we have received more reports on the amount of solicitors/scammers knocking on doors. Please read the notes below and be careful when opening your door or getting out of your car. Call 911 immediately if you see suspicious people or cars in the neighborhood! Report any suspicious activity to your Grid Coordinator.

Do you know who the Coordinator is for your home? Email us to be added to the Watch List or for more information.

March 21, 2011 Case Number: 11-030845 On Wood Trail, Attempted theft by Deception, to swindle money. A black male with a juvenile knocked on the homeowners door. The man had a large canister in his hand and told her that he was there to exterminate the house. She refused but the man was still able to make his way inside and told her that he was exterminating the other houses on the street. The man went into the kitchen and sprayed an unknown solution under her sink and then stated that she needed to pay him $50 dollars for the service. The homeowner refused to pay and the man left her house. The man got into a white pick-up truck with the young boy and drove off.

March 2011  I want to inform my neighbors of a con artist trolling the Medlock neighborhood and probably others nearby. He came to my house this morning around 8:15 and claimed to be a neighborwho needed gas money to visit his father in the hospital. I did give him a small amount of cash. He is a white male, approximately 40, 5'10", and 200 pounds. He drove a dark blue Jeep Cherokee with a dealer tag. I learned that he has an extensive history doing this in Gwinnett county and has been arrested before. I notified the Dekalb county police.

March 3, 2011 Case Number: 11-024498 HARRINGTON DR - THEFT OF AUTOMOBILE
Feb 12, 2011  I came home around 11:30 pm on Friday night and entered my car again at about 10:30 am on Saturday morning, and I noticed immediately that someone had been in it looking for something to steal. The glove compartment was open and everything was messy in it, my coin holder was open and emptied, the arm rest console was open and everything messed up. They only got about $1 worth of pocket change but it was till unnerving to know that someone walked up my driveway and had the gall to do that. The car was unlocked.

Feb 8, 2011  I live on Suzanne Drive and had the same experience that was posted on January 18th in your neighborhood watch update. My occurrence actually happened on February 8th of last week, but the description of the activity was almost identical to the one I read.


Jan 18, 2011 Neighbor on Harrington About 30 minutes ago I was returning to my yard from a walk and a young man asked if this was my house. He approached me saying he was trying to earn points toward a college scholarship and a trip to Paris for Spring Break.  Initially, he said he had come from next door. I have no idea if that was true but he appeared less than candid for the following reasons: he shifted his approach several times, he looked older than 18, he looked as though he'd dressed for the part rather than actually being a kid, his material was dated 2010 and was very worn looking, he said several times he'd left a sticker on my door so no one else would bother me (there was no sticker or any kind of material on or near my door when I looked), when I asked if I could review the material he said this was the last day for him to collect points (money as a donation or to subscribe to a magazine.)

If you'll be out and about on Sunday, you may want to reveiw out the Publix Georgia Marathon schedule and course at http://www.georgiamarathon.com/half_marathon.htm.

Although it doesn't directly impact MANA, it does involve many close-by neighborhoods:


The Georgia Marathon is a true showcase of historic Atlanta, beautiful Decatur and all of the neighborhoods in between. The staging area for the Start and Finish is in Centennial Olympic Park in the heart of downtown Atlanta. The Start corrals are on Marietta Street adjacent to Centennial Olympic Park. Participants run downtown through Georgia State University, by the Boisfeuillet Jones Atlanta Civic Center, over the Jackson Street bridge with a spectacular skyline view, and into the Martin Luther King Jr Historic District by the house where Dr. King was born. The course continues through the Old Fourth Ward and Inman Park neighborhoods, through eclectic Little 5 Points, on Freedom Parkway by The Carter Center, and through the Poncey-Highland neighborhood where the Half Marathon splits from the Marathon course. Marathon participants continue through the Candler Park neighborhood, on historic Ponce de Leon, under the MARTA tracks onto College Avenue, through the Agnes Scott College campus, by quaint Decatur Square, on the Emory University campus, through the Druid Hills neighborhood past the house featured in the movie Driving Miss Daisy. Participants pass through the Virginia-Highland neighborhood, run over the Park Dr bridge into Piedmont Park and exit on 12th Street, run through the Midtown neighborhood on 12th St and Spring St, cross I-75/I-85 on the 5th St bridge, run through the Georgia Tech campus, and return to downtown via Marietta St to the Finish line where the party begins at Centennial Olympic Park! 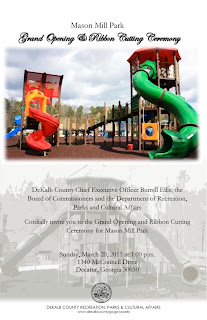 Mason Mill Park, as you know, has undergone recent renovations and the long-awaited ribbon-cutting ceremony will take place this sunday, 1pm [1340 McConnell Dr., Decatur GA 30030].  We are expecting fantastic weather this weekend, too. A perfect match.

Email ThisBlogThis!Share to TwitterShare to FacebookShare to Pinterest
Labels: parks 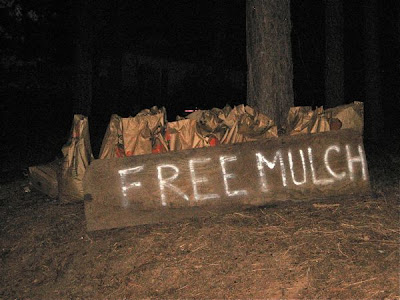 Curb appeal (oh, I pun!).  These great neighbors have bagged mulch for your favorite garden bed. Those are big garden bags, by the way. Without anything to give you a sense of scale, it really looks like these could only be useful at Barbie's  dream house.

Come get 'em while they are fresh!

Email ThisBlogThis!Share to TwitterShare to FacebookShare to Pinterest
Labels: yards 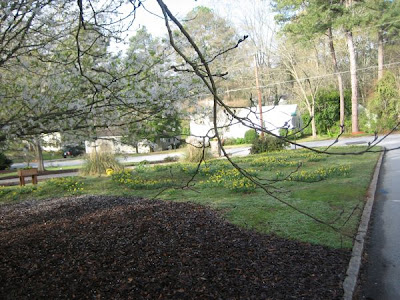 Now that's what they call curb appeal!
Have you spotted this MANA yard? If not, there's still time for a stroll to take in this veritable explosion of mini-daffodils. 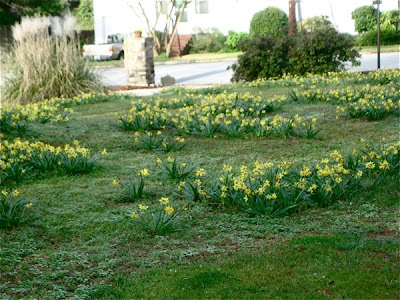 Email ThisBlogThis!Share to TwitterShare to FacebookShare to Pinterest
Labels: yards

MANA offers a big thanks and applause for the efforts of Kathryn, Deb, Jeanette and Connie that joined local Boy Scouts and other volunteers for an initial clean up of the Ira B. Melton Walking Trail (located off Desmond Drive near the intersection of Reckle Drive). While the group made a huge difference in the area (one volunteer pulled 6 huge trash bags of just beer bottles and cans alone!) there is still a lot of waste to be cleaned-up in our area and MANA hopes more volunteers will commit to future clean-ups here and for our Earth Day clean-up event on April 30th this year.

More information can be found on the SFC website at http://www.southforkconservancy.org and on the CHCA website: http://www.clairmontheights.org/

Email ThisBlogThis!Share to TwitterShare to FacebookShare to Pinterest
Labels: Ira B. Melton Trail

DeKalb School Board Votes to Close and Redistrict Medlock Elementary

March brings significant change for our neighborhood as we recieved news on March 7th of the Board's vote to close Medlock Elementary and redistrict the current Medlock Elementary homes in the MANA area to Laurel Ridge Elementary. For more info and history of MANA's involvement be sure to read the Spring 2011 Medlock Matters newsletter (recently distributed) or visit http://www.dekalb.k12.ga.us/redistricting. The school will close at the end of the school year.

While the redistricting change will be challenging, we know Laurel Ridge is an active and involved PTA and community very similiar to ours. MANA also has the opportunity to have strong voice in community development as we look at the future use of the school's campus and building.

Please join us at the March 28th Community Meeting to hear more about the ideas, ask questions, contribute your thoughts, and volunteer to participate in future efforts. Your active participation and voice has never been more important to us.

Please join us at the March 28th Community to gather with your MANA Board and neighbors for our first 2011 MANA Community Meeting.

We will share updates on key MANA activities and focus on discussion regarding the future use of Medlock Elementary school building.

Your active participation and voice has never been more important MANA's role and influence in the future paths of community development.

Do you have a GREEN thumb? If so, you're definitely not alone in this neighborhood. MANA is thrilled to have a community garden right here in our community. The garden is located at the corner of Willivee Drive and Scott Circle and has over 16 gardeners this year and Spring planting is underway. There is some room for additional expansion and plots in nearby lots (these are floodplain lots bought out by DeKalb County with FEMA funds). Perhaps one has your name on it?

For more information on this community effort, see a recent article on North Druid Hills-Briar Patch.