Approximately 60 residents were in attendance.

Distracted Driver Bill
Representative Renitta Shannon discussed HB673, the distracted driver bill that passed recently.  The bill states that while operating a vehicle (meaning, while on the road, moving or not), drivers are not to touch their cell phones/tablets (wireless communication device) with any part of their body except for making an emergency call. Drivers may use hands-free access which means voice activation and earphones. Drivers may adjust settings (e.g., start a music or navigation app) while parked, but are not to touch the device once they are on the road. Drivers can make/take calls as long as they do so without touching the phone; drivers are not to text (already illegal) or record videos while driving. Again, note that the law applies even if a driver is stuck in traffic that is not moving. The law goes live on July 30. See this article for more details: http://wgxa.tv/news/local/all-you-need-to-know-about-the-ga-distracted-driving-bill 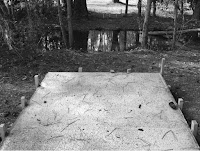 Presented by Ted Ward, MANA Parks and Greenspace Chair. Footing for a small bridge over a culvert, connecting Medlock Park to the Scott lots, is now in place. Fundraising continues towards securing funding to build the bridge.

The DeKalb Quality of Life Unit 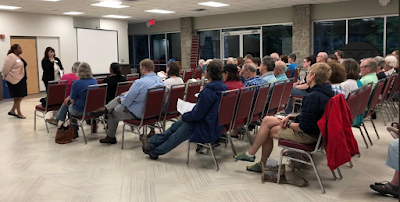 Presented by A. Claire Farley (Community Prosecutor, Assistant Solicitor General) and Karen Scott (Code Enforcement Prosecutor, Assistant Solicitor General). In a nutshell, code enforcement used to be defined as a victimless crime; beyond reporting nuisances/code violations, citizens affected by these issues had little representation. This unit is tasked with following up on complaints, escalating cases for non-compliant offenders, and showing up in court to forcefully represent the public's perspective. We've already seen this unit at work in addressing the junkyard situation at Vol Repairs. Their presentation appears below. 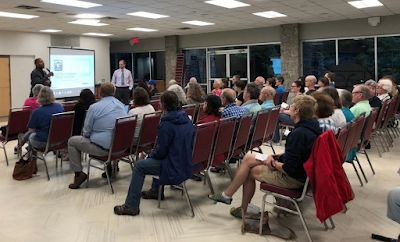 Presented by MARTA representatives Brian Hobbs (MARTA Transit System Project Manager) and Scott Brown (Clifton Corridor Project Team Leader). There is now a preferred option for this MARTA line that would, when/if completed, run from Lindbergh to Avondale stations, connecting keep employers in the area (Emory University, CDC and DeKalb Medical). This plan is currently under the NEPA review (required before funding can be approved). Following several years of study, two finalists (Alternatives 6 and 7) emerged. Alternative 7 requires extensive underground work and therefore is too costly and Alternative 6, mostly at grade but with some tunnels, is currently the preferred solution. It would cover 8.3 miles from Lindbergh to Avondale and is expected to cover that distance in ~26 minutes. Construction would begin in 2022, operation in 2026.
Progress on this line is dictated by available funding; currently, funding is secured for the portion that is in City of Atlanta only. With Emory University's recent annexation, that means that existing funding stretches only as far as the Emory connection (Phase I).

The remaining portion (Emory to Avondale, Phase II) is in DeKalb County and no funding has been identified.

Phase I runs along CSX alignment, would be above-ground on Clifton Rd and would consist of light rail (think Atlanta streetcar but with longer cars, vs. MARTA heavy rail trains). Light rail cars have overhead power lines and are quieter than heavy rail (per noise/vibration analyses). The line would start at Lindbergh Station and have stops at Cheshire Bridge and Sage Hill/Briarcliff. It would wend its way to Clifton Road (with stops at CDC, Emory's Rollins buildings/Conference Center) and go underground in the portion between CDC Parkway and Gatewood Rd. The next portion (on Clifton Road) would be light rail on the median lanes; these would turn onto Haywood Drive (with a stop facing Druid Hills High) and on to North Decatur Road.

For Atlanta, decisions to move forward would be made in September. As to Phase 2, DeKalb has a master planning session coming up and transit discussions should be part of it. As these new rail systems develop, MARTA would adjust bus service to maximize access (e.g., connect this new light rail to other destinations such as North DeKalb Mall). But again, past Emory, this new line will only connect to Avondale if DeKalb County comes up with the necessary funds.

On North Decatur Road, light rail would travel two ways alongside car lanes; bike lanes would also be considered. This obviously would require some widening of North Decatur Road. The light rail cars would control crossing lights for efficient travel times. Long conversations remain ahead of us.

These stations are proposed as walk-up stations with no parking lots for commuters. Audience members asked if this will cause problems with commuters parking on residential streets; the answer was that MARTA would help provide enforcement. Should the DeKalb portion be developed, there would be stops at North Decatur/Clairmont Roads, Suburban Plaza, DeKalb Medical Center, Irwin Way, and Your DeKalb Farmers Market before reaching the Avondale station.

We can expect additional workshops in summer/early fall for additional public input. Of course we will share that information in this space as soon as it is available. 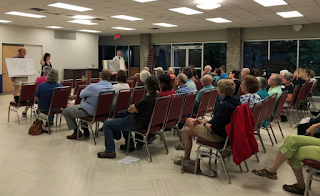 As discussed at that community meeting on April 26, 2018, the project's scope requires an impact study. A meeting took place on June 1, 2018 (community representatives were not invited) and Smith, Gambrell & Russell, LLP, the company handling zoning for this development, shared a letter of understanding that outlines the discussion that took place then. This document was prepared by the Georgia Regional Transportation Authority (GRTA),  a state-level authority that oversees mobility and air quality for 13 area counties (DeKalb and Fulton included). The study must also be shared with the Atlanta Regional Commission, DeKalb County and GDOT District 7 (which encompasses Cobb, Clayton DeKalb, Douglas, Fulton and Rockdale counties). See the document here (pdf). The letter states the project will be built in one phase, with a completion date of 2021.

On June 13, the AJC briefly reported on the North DeKalb Mall redevelopment (currently dubbed Decatur Landing) and shared some preliminary plans [see those plans here (pdf)]. The AJC article states it will take a couple of years to finalize the plans.