This is a brief recap of  a zoning pre-submittal meeting for the construction of a Residence Inn extended stay hotel on Blackmon Drive as was announced earlier. The meeting was led by Doug Dillard, representing Danny Patel (Decatur PSC LLC). The purpose of this meeting was to gauge community interest in the project.
The project would require rezoning and a SLUP, neither of which have been applied for at this time.

Around 130 neighbors attended the meeting which certainly was loud at times. 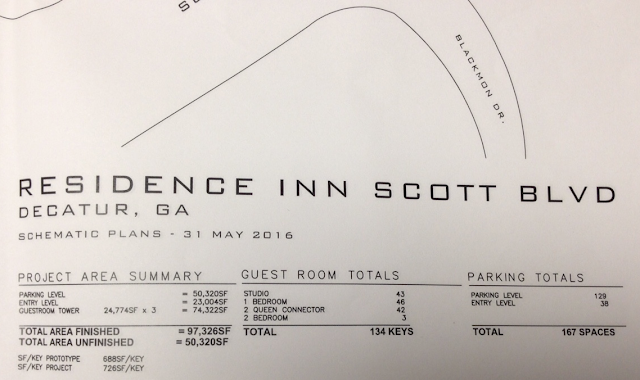 As noted in a handout distributed to the audience (see highlight above), the hotel would feature 134 units, including studio, "queen connector" and 2 bedroom units. The developer seeks to build a four to five-story facility.

Cards were distributed for the audience to write down questions but only a few were read and briefly answered. Mr. Dillard consistently offered the explanation that the corridor will be developed, that higher density is to be expected, and that the issue is whether this kind of use is acceptable to the community. That question was met with a loud NO from the audience.

There was no clarity at the end of the meeting as to whether the developer intends to submit a rezoning/SLUP proposal for this project.

Update (6/6/16): MANA zoning chair T. Same received an email from the developer that they will not proceed with a rezoning application for this project at this time.
Posted by me at Thursday, June 02, 2016