Tanya Myers, MANA's education liaison, alerted us that the DeKalb County School District is considering a proposal that would accelerate the construction of the new Fernbank Elementary grounds and shift attendance lines for many young Medlock residents:


Superintendent Cheryl Atkinson presented a draft of her plan to merge some schools and expand others as part of a new five-year school construction program. ... Another proposal also provoked a strong reaction: Atkinson recommended floating $80 million in bonds — borrowing money — to expedite construction of several schools.  Read the whole article @ AJC.

Following up with a Fernbank contact and with Mr. McChesney, Tanya reports that "it looks like the new plan would have our neighborhood (most of or perhaps all) redistricted to Fernbank with the enlarged school re-opening to accept 200 additional students in fall of 2014. This proposal returns Laurel Ridge to its original (2011) attendance zone prior to the addition of Medlock students."

Tanya also clarified that "under the SPLOSTIV timelines that the board has already approved, the new, larger Fernbank Elementary will open January 2016. If the bond were approved, construction timelines would be accelerated and the new, larger school would open January 2015 (see page 53 on the above link for the comparison). It may be worth pointing out that the only difference is one of timelines; redistricting is planned to happen whether the bond is approved or not."

Dr. Atkinson's presentation is posted at the DCSS website, SPLOSTIV section. Below is the Druid Hills Cluster proposal:

The image below superimposes the attendance line adjustment on a Google map of the area, using the location of the schools (in both depictions) as anchor points. This image is presented for informational purposes only.


Below, the same map, with MANA highlighted in yellow. Again, noting that these depictions are not final nor validated by DCSS, it appears that some MANA neighbors who reside in parts of Hunting Valley and Willivee Drive would remain in the Laurel Ridge Elementary attendance zone. 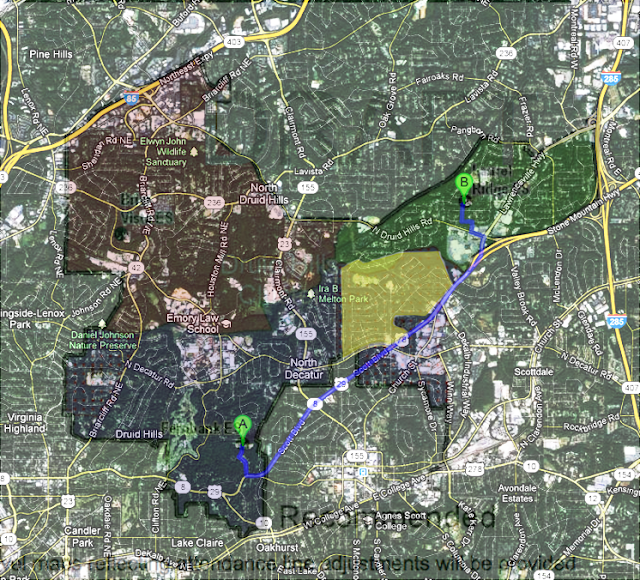 As we know more, additional information will be posted.