Most people have heard of bee colony collapse disorder and its potential impact on our food supply. Insect-driven pollination is said to be responsible for one-third of human crops; that includes crops we consume directly (such as fruits, nuts and vegetables) or indirectly (e.g., alfalfa and clover that we feed to livestock). Bee colony collapse was first reported in 2006 and shows a puzzling pattern whereby the adults appear to weaken and die away from the hive. The result is a bit Twighlight Zone and a bit Fastball:
The children woke up
And they couldn't find 'em
They left before the sun came up that day
They just drove off
And left it all behind 'em
But where were they going
Without ever knowing the way?

A number of explanations have been posited, with a strong indication that the neonicotinoid insecticide imidacloprid plays a key role. Imidacloprid is considered safe for general use, however, recent research indicates that imidacloprid builds up in the bee's body until it reaches a lethal level. Bees are exposed when they consume contaminated pollen, and exposure also increases if bees are fed corn-based syrup by their keepers when blooms are not available (corn is often treated with the pesticide).

An article in Wired magazine characterizes pesticide's effects as follows:


"Honeybees are clearly exposed to [pesticides] throughout the year and through multiple environmental routes. At certain times, especially in spring, death often follows exposure, and even non-lethal exposures may disrupt bee learning and navigation. Neonicotinoids also appear to make bees especially vulnerable to certain parasites and may interact similarly with other stressors."

The European Union is taking the threat very seriously, going so far as to issue a Honeybee Health report. In the US, a similar report on bee health was prepared for Congress, and includes this figure: 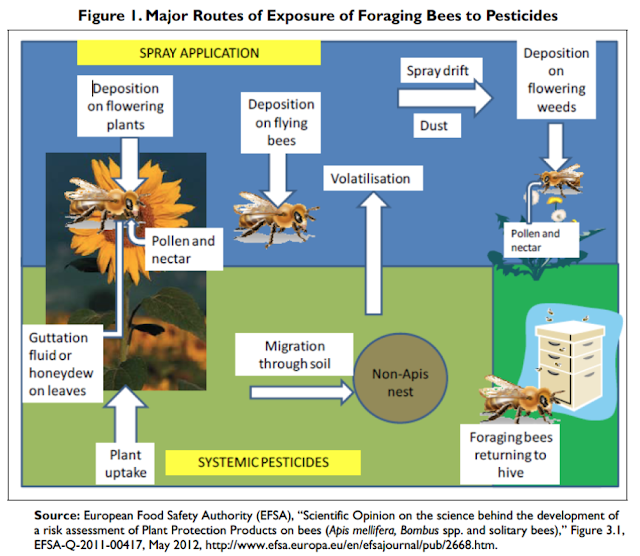 A recent study emphasizes that wild pollinators enhance fruit set regardless of honeybee abundance. According to The Guardian's summary of the report,


"Wild pollinators perform better than honeybees because they deploy a wider range of pollinating techniques, such as "buzz" pollination. They also visit more plants, meaning much more effective cross-pollination than honeybees, which tend to carry pollen from one flower to another on the same plant."

The bad news is that wild pollinators are in world-wide decline too, due to the double threat of insecticides and habitat loss.

What can we do? Other than the obvious avoidance of imidacloprid whenever possible, one way to help wild pollinators is by choosing plants that offer them shelter and food. The following articles discuss how you can beautify your landscaping, feed wild pollinators and provide shelter for (good) pest predators by choosing beneficial companion plants: